id Software LLC (/ɪd/) is a game developer based first in Mesquite, Texas, and later in Richardson, Texas. It was founded on February 1, 1991 by four members of the computer company Softdisk: programmers John Carmack and John Romero, game designer Tom Hall, and artist Adrian Carmack. They are the authors of Doom and Doom II, as well as numerous other well-known titles such as the Quake series of games, Wolfenstein 3D, and Commander Keen.

The company underwent drastic personnel changes over the years; very few Doom-era principals remained there two decades later. On June 24, 2009, it was announced that id Software had been acquired by ZeniMax Media. In 2015, the company opened a second studio in Frankfurt, Germany.[2] 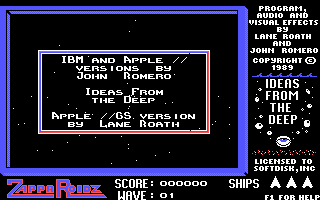 Although id originally began by publishing games in other genres, such as the two-dimensional platformers in the Commander Keen series, the company became deeply involved in the creation of the first-person shooter genre early on. Their earliest efforts in 3D date back to the Softdisk era, with titles such as Hovertank 3D and Catacomb 3D. The first 3D game they made as an independent studio, Wolfenstein 3D, is often considered as one of the first FPSes, and a highly influential title in its own right. Doom popularized the genre and PC gaming in general, as well as pioneering multiplayer with its serial, LAN, and dial-up capabilities. Its successor Quake was the first shooter to have a client-server architecture for multiplayer.

id Software would remain one of the foremost independent game studios in the business into the 21st century, successfully negotiating with third party publishers and distributors, including GT Interactive and Activision, to bring their games to the public. This was carried out while simultaneously making significant revenue through licensing of John Carmack's powerful, bleeding-edge game engines to other studios (the series of which came to be retroactively known as "id Tech"). This era came to a close on June 24, 2009 when the co-owners reached an agreement to sell all stakes in the company to ZeniMax Media, the parent company of Bethesda Softworks, which now serves as id's publisher. ZeniMax Media itself later entered an agreement to be acquired in its entirety, along with all subsidiaries and intellectual properties, by Microsoft on September 21, 2020, for a sum of US $7.5 billion.[3]

The history of the original individual members of id Software diverges at various points, as members resigned or were fired for various reasons. This began with the departure of Tom Hall during the development of Doom, the firing of John Romero after the release of Quake, a falling out with Adrian Carmack in the wake of a failed buy-out attempt by Activision in 2004,[4] and most recently (and publicly) the departure of John Carmack in November 2013. After leaving Softdisk, Lane Roathe continued using the company name "Ideas From the Deep" alongside Rebecca Ann Heineman, working primarily on Macintosh and Windows ports of games by Interplay Entertainment and Pangea Software.

id Software was an early entrant into the field of engine licensing, beginning with their first shareware game series, Commander Keen, and continuing on through Doom 3's id Tech 4 engine. According to Eurogamer.net, "id Software has been synonymous with PC game engines since the concept of a detached game engine was first popularized". During the mid to late 1990s, "the launch of each successive round of technology it's been expected to occupy a headlining position", with the Quake III engine being most widely adopted of their engines. This ended abruptly with the acquisition by ZeniMax Media, upon which it was announced that only other Bethesda-managed game studios would be given access to id Tech 5.

Since id Software revealed id Tech 5, they call their engines "id Tech", followed by a version number.[5] Older engines have retroactively been renamed to fit this scheme, with the Doom engine as id Tech 1.

During John Carmack's tenure at the company, it was notable for its support for open source software. John Carmack open-sourced most of the major id Software engines under the GNU General Public License. Historically, the source code for each engine was released once the code base was five years old. Consequently, many home grown projects sprung up, porting the code to different platforms, cleaning up the source code, or providing major modifications to the core engine. Wolfenstein 3D, Doom and Quake engine ports are ubiquitous to nearly all platforms capable of running games, such as hand-held PCs, iPods, the PSP, the Nintendo DS and more. The last codebase to be open-sourced by id was Doom 3: BFG Edition in 2011.[6]

id Software was an early pioneer in the Linux gaming market,[7] and id Software's Linux games were some of the most popular of the platform. As with the company's support for the open source movement, this also abruptly ended with the acquisition by ZeniMax Media, who refused to provide support for "unofficial binaries" beginning with Rage. John Carmack instead suggested that emulation was the way forward for gaming on Linux.[8]