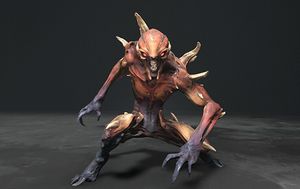 An imp.
This article is about the monster in Doom Eternal. For other games, see:

The imp returns as a monster in Doom Eternal, similar to its appearance in Doom (2016) but with a more muscular, bulky stature, and now sporting sharp spikes in many locations on its body, much like the classic imp. It also has brighter, red-colored glowing eyes and darker brown skin, details which also hearken back more closely to the monster's original design.

The imp retains statistics and behaviors which mostly match those from the previous game. The ice bomb is effective at forcing them to stay still for follow-up attacks.

The imp has the same amount of health as the zombie, with 200 HP, but very slightly less health during stagger (90 HP), making them ever so slightly easier to accidentally kill instead of glory kill. In particular, two plasma shots will kill a staggered imp but not a staggered zombie.

The Imps are some of the most common natives of the Hellscape, living as scavengers of the Underworld. They are unintelligent, and are motivated primarily by the urge to hunt. This predatory instinct combined with a talent for violence makes them a common sight in the armies of Hell as expendable cannon fodder.