Impossible: A New Reality is a single-level PWAD for Doom II, authored by JK and designed for ZDoom. It won an Escher Award at the 13th Cacowards ceremony. 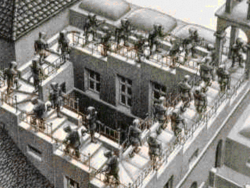 The credits screen is also an engraving by M. C. Escher.

You begin in a patio. The action takes place in an Old Mansion on lava. The automap shows no lines. The level is full of "impossible" architecture, for example stairs that go up infinitely but go down only once. The impossible architecture is constructed with the use of the silent teleport trick.

The map includes one custom monster, a variant of the cyberdemon that is described as "Mister Cyberdemon" when it kills you. Its attributes like health and speed are the same as the regular monster, but upon its death the yellow skull key is dropped. 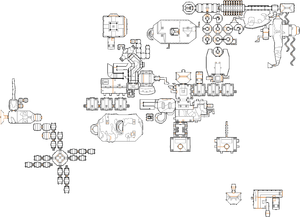 Map of Impossible: A New Reality
Letters in italics refer to marked spots on the map. Sector numbers in boldface are secrets which count toward the end-of-level tally.

* The vertex count without the effect of node building is 13480.