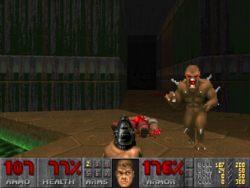 An imp moves to attack our hero in E1M1: Hangar
This article is about the monster in the classic Doom series. For other games, see:

The imp is a human-sized, humanoid, fireball-flinging monster, the most common opponent encountered in id Software's Doom and Doom II. It is leather brown in color, with red eyes, numerous white bony spikes protruding from its body, and sharp white claws on its hands and feet. Imps encourage new players to practice strafing. They are officially described as follows:

"You thought an imp was a cute little dude in a red suit with a pitchfork. Where did these brown bastards come from? They heave balls o' fire down your throat and take several bullets to die. It's time to find a weapon better than that pistol if you're going to face more than one of these S.O.B.s."
― Doom instruction manual [source]

An imp will make one of two different loud, serpentine hisses when it is alerted. An imp attacks by hurling a single bright red fireball, which inflicts projectile damage when it strikes another living object. At melee range, it uses its razor-sharp claws to scratch; if its target moves out of range before this attack has followed through, the imp will proceed to shoot a fireball instead. When killed without being gibbed, an imp will randomly emit one of two distinct low-pitched snarls, as it falls on its back and a hole opens up in its midsection, disgorging plentiful amounts of blood.

The imp moves slowly, as do its fireballs. The player should practice until evading both sorts of objects becomes completely straightforward (except perhaps under highly unusual circumstances, such as a teleportation trap, in close quarters, or when surrounded).

An imp can usually be killed by a single shotgun shell and often by six bullets. As the citation above implies, facing multiple imps with a pistol takes concentration, but it can be done, given sufficient maneuvering room and adequate footwork on the player's part. In fact, the imp's relatively high pain chance sometimes makes it difficult for it to retaliate when damaged at a fast rate.

Melee against an imp should usually be avoided by novices as it is much trickier than against a demon, since the imp is faster with its clawing attack than the less dexterous demon. The chainsaw takes only a bit of time to dispatch an imp, so it is convenient against a single enemy, but the player risks being surrounded if there are several imps. If the encounter takes place in a large open area or with the advantage of surprise from around a corner, hit-and-run tactics with the berserk fist are safe and effective, as long as the player is not under fire from other directions.

Although its ranged attack and hit point total give it an advantage against the lesser zombies, the imp can easily find itself outmatched during monster infighting. A single imp fighting a shotgun guy may yet call victory, but a demon or spectre can almost always overpower the first two or three imps they engage in melee, and a couple of blows from any larger monster will more than likely put an imp out of its misery.

Imp fireballs move twice as fast as usual when either the Nightmare! skill level or the -fast command line parameter are used, and these are hurled persistently by the monster as long as a target is in sight. 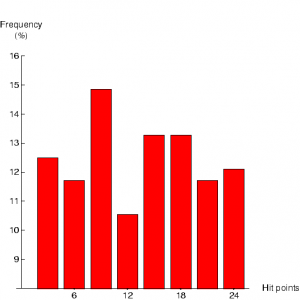 Damage done by an imp's attack (either type)

In the IWADs the imp is first encountered on these maps per skill level:

The IWADs contain the following numbers of imps per skill level:

Of the maps covered on the Doom Wiki, the following have the highest numbers of imps in single-player on skills 4-5: 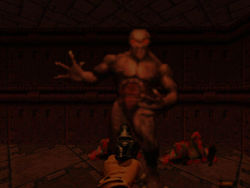 The imp is featured in Doom 64, though with a sleeker appearance, only having noticeable spine-like spikes along its back.

A more powerful variant known as the nightmare imp also occurs as one of the new monsters in the game.

This version of the imp also features discrete animations for melee attacks versus ranged attacks, similar to the revenant in other games. This means that unlike the original version, the attack type is determined when it commences rather than by the victim's proximity at a particular frame; the imp cannot throw a fireball the instant his claws have missed the player.

In Doom RPG and its sequel, Doom II RPG, the imp appears as a class of monster. There are three variations, identified by color:

Imps are most susceptible to attacks from shotguns.