Infraworld - Coma Moonlight is a single-level PK3 for Doom II with the GZDoom source port. It was designed by StormCatcher.77 and uses the music track "Moonlight" by Darkhalo. Coma Moonlight is the sequel to the 2019 release Infraworld - The Hatehammer. After an initial release on May 2, 2021, it was uploaded to the /idgames archive on May 10, and received a Cacoward towards the end of that year. 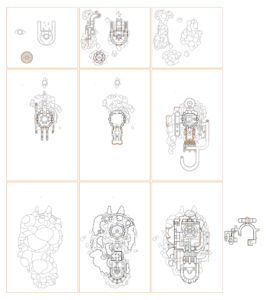 Map of Infraworld - Coma Moonlight
Letters in italics refer to marked spots on the map. Sector, thing, and linedef numbers in boldface are secrets which count toward the end-of-level tally.

The (absence of) data was last verified in its entirety on December 10, 2021.

Coma Moonlight was originally intended for Refracted Reality, but was released standalone after RR's development stalled.