Infraworld - The Hatehammer is a single-level PWAD for Doom II and a Boom compatible source port that initially came out in July 2019. It was created by StormCatcher.77 and uses the music track "In The Void" by Catamenia. For the 2019 Cacowards it was selected as one of the runners-up, and followed in 2021 by a sequel, Infraworld - Coma Moonlight. 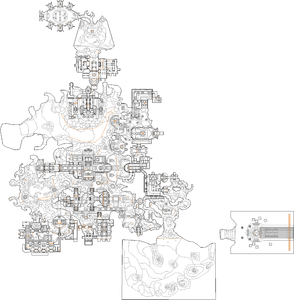 Map of Infraworld - The Hatehammer
Letters in italics refer to marked spots on the map. Sector, thing, and linedef numbers in boldface are secrets which count toward the end-of-level tally.

A soul sphere (thing 1389) is inaccessible without cheat codes. The maximum number of items possible is 99%.

Due to secrets #19 and #20 being inaccessible without cheat codes, the maximum number of secrets possible is 90%.

* The vertex count without the effect of node building is 35933.