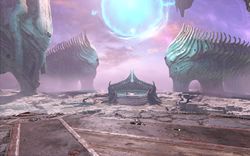 Wide view of the Ingmore's Sanctum.

The Doom Slayer approaches the Tomb of Souls, with Samur Maykr standing behind him

Ingmore's Sanctum is a location that first appears in The Ancient Gods, Part One, the first downloadable expansion for Doom Eternal. It is a mountain that towers above the Blood Swamps within the realm of Hell and is home to the Tomb of Souls, where the life spheres of the Father, the Dark Lord and numerous unknown beings are kept. As a fragment of Urdak, it is the only part of Hell that the Seraphim are able to enter.

The Book of the Seraphs refers to Ingmore's Sanctum as sacred and protected ground that served as the Father's first workshop and a retreat from Urdak, where he was supposed to have formed the realm of Jekkad and the Dark Lord (then known as Davoth). Although Samur Maykr could not enter Jekkad, as the Father's most trusted servant he was permitted to enter the Sanctum. The sanctity of the Tomb of Souls is protected by the Trial of Maligog.

After the Father confronted the Dark Lord and tore out his life sphere, it was placed in the Tomb of Souls where the Dark Lord would not be able to lead his forces directly. Some time later, sensing the rising danger from Hell, the Father commanded Samur to remove his life sphere from the Luminarium and bring it to the Tomb of Souls as well while his consciousness was reformed into VEGA. There are also fourteen smaller life spheres stored in the Tomb, which the Book of the Seraphs describes as belonging to immensely powerful gods who were deemed to be flawed by the Father.

During The Ancient Gods, Part One, the Doom Slayer is tasked by Samur with retrieving the Father's life sphere as Samur believes he can end the war against the demons and prevent Samur's imminent Transfiguration. After journeying through the Blood Swamps and overcoming the Trial of Maligog, the Slayer is carried up to Ingmore's Sanctum by a Titan and finds Samur waiting for him there. Against Samur's urging, the Slayer crushes the Father's sphere in his hands before taking the Dark Lord's sphere instead.

In Part Two, the Dark Lord transports himself and the Slayer to Ingmore's Sanctum during their battle. Following the Dark Lord's destruction, the Slayer's body is placed in a sarcophagus in the Tomb of Souls by the Seraphim, as the Ancient Gods watch, on the spot where the pedestal for the Father's life sphere originally stood.