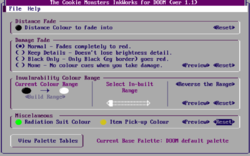 Inkworks is a DOS-based utility by "The Cookie Monster" that can perform various tweaks on the palette and colormap, including fog effects or altering the damage flashes. Only one version of Inkworks was ever released, version 1.0, in 1996, however a later distribution included an additional tool, Mixmaps.

Inkworks was distributed with DUSTY.WAD, a short level demonstrating several of the tricks possible with Inkworks. In particular, the fade colour was changed from the default of black to a dark brown colour, simulating a dusty, sandy environment.

Although only one version of Inkworks was released, a later distribution of the program (INKWKS11.ZIP) came with a companion program called Mixmaps.

Mixmaps allows you to combine parts of COLORMAP lumps from separate WAD files into one. This allows you to, for example, partition the fade effect into different ranges of light levels, to mix fade-to-black and another effect such as fog on the same map. Using this trick effectively means carefully managing which light levels can be observed from different areas of the map.