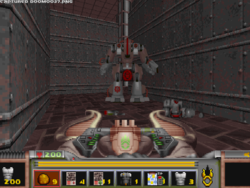 The player fights one of the giant and intimidating inquisitor robots in the Loremaster's Lab. 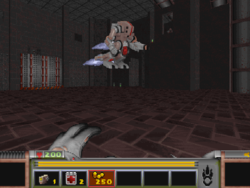 An inquisitor glides gently to the ground on a rocket booster to confront the player.

The inquisitor is the most powerful non-boss enemy in the game Strife. It is a gigantic bipedal robot with an appearance reminiscent of popular mechs, and to an extent resembles a larger version of the reaver. It has no visible head, except for a blocky structure with no humanoid features. It is equipped with rocket boosters on its back and feet, allowing it to take flight temporarily to get over walls between it and the player. It is the only stock enemy in a Doom engine game that is capable of switching between walking and flying.

The inquisitors are extremely well armored, with 1000 hit points, and are equipped with a grenade launcher and a machine gun in addition to extreme mobility. Because they are immune to blast radius damage, mini-rockets, HE grenades, and WP grenades have very little effect on them. Instead, the Sigil or the alt-fire mode of the Mauler are the best bet for destroying them quickly. When they die three explosions follow, dealing blast damage to all nearby characters, including the player.

The inquisitor only appears in the final third of the game. Two of them appear at the Factory, one at the Proving Grounds, two guard the Loremaster in his laboratory and one also appears in the Entity's spaceship wreck at the end of the game. The number of inquisitors differs between difficulty levels, with fewer appearing in the lowest two difficulties.

Due to a glitch, it is possible to kill an inquisitor with a single punch from the punch dagger, so long as the enemy has not yet walked on the ground. When dispatched in this fashion, the robot will disappear instantly without going through any pain or death animation.

In the IWAD the inquisitor is first encountered on these maps per skill level:

The IWAD contains the following numbers of inquisitors per skill level: