The International Doom League (also referred to as IDL) is a private, competitive CTF league played on the Zandronum engine. 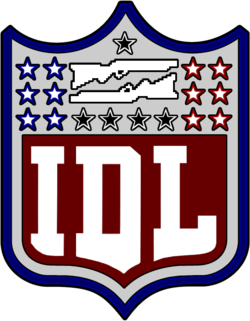 The official IDL shield as of Winter 2011. The colored stars represent the 12 active teams.

The International Doom League is the largest and longest enduring Doom CTF league in the world. The IDL is made up of eight teams, in two conferences, the International Doom Conference (IDC) and the World Doom Conference (WDC) with two divisions each. The regular season lasts nine weeks with an additional three weeks of playoff contention. All teams that win their divisions enter the playoffs as well as an additional wild card team.

The final game of the season is called the MasterBowl, which is followed by a roman numeral denoting the season the game was played in. This is a play on the National Football League's SuperBowl championship game. The IDL draws much of its inspiration from the NFL and other American sports leagues. The two teams which face off are those who won their conference's championship the week prior to the MasterBowl.

The IDL is currently an invite only league, not only to ensure that teams sign reliable players, but also those who tend to play at the highest of levels. Players who show a proactive, vested interest in the league, the game, and the community are those most likely to receive free agency invitations. The IDL free agency has housed 130+ representatives from over twelve countries as of the Winter 2011 draft.

Each IDL game is composed of a minimum of two rounds. A standard IDL round is 3-on-3 at ten minutes each, with a five flag limit. When the time or flag limit is reached, the team with the most flags scored is the winner of the round. If the amount of flags scored is equal, that round is a tie. If a different team wins both the first and second rounds or one of those rounds was tied, a third tie-breaker round is played. At the completion of the third tie-breaking round, the team with the most rounds won is declared the winner of the game. During the regular season, should the amount of rounds won be equal, the game is declared a tie. During the playoff season, tie-breaking rounds are played until a team wins one.

The original IDL logo from 2006. The IDL now uses an updated version of this as its parent logo.

In the league's inaugural season, eight teams competed in an eight week regular season with three weeks of playoff contentions. During this season, players signed up and captains were randomly assigned to eight teams. Teams only had rosters of three players. Both of these aspects of the league would change in the subsequent summer season to address a number of issues including a rapidly rising interest in the league and to make teams more stable.

For three seasons (Summer 2007 - Summer 2008), the IDL moved to a twelve team format. The first of these seasons saw an eleven week regular season, the longest to date. Starting with the Winter 2008 season, the league moved to a nine week, eight game regular season. The Summer 2008 season would be the last time the league would have more than eight teams for the next two years.

Other notable differences during the first four seasons of the league include open registration and captains being able to name their teams. These aspects of the league changed in Winter 2009, in a period dubbed the Franchise Era. Teams were then considered "permanent" and players could carry over season to season. This change was made in an attempt to make the IDL function more akin to a true professional sports league. However, the franchise system was eliminated from the league rules in the Summer 2010 season as the league went back to a three-round draft system. Captains were still able to retain their teams from season to season.

For the Winter 2011 season, the IDL has moved back to a twelve-team format, adding four expansion teams (one to each existing division). In addition to more teams, the schedule saw the addition of one more week, moving the regular season to a nine game schedule. This would be the first change in total games since the Winter 2008 season.

In May 2012, the IDL decided to move away from ZDaemon and switch to Odamex. Two years later, the IDL switched port again, this time for Zandronum.