Invasion... Level 2: The Upper Decks is a single-level PWAD for Doom that was released in 1994. It was designed by Andy Chen and Claude Martins. It was preceded by Invasion... Level 1: Contamination.

Invasion... Level 2: The Upper Decks was featured in Doomworld's Top 100 Most Memorable Maps, placing 83rd, and is also included in the Top 25 Missed Cacowards. 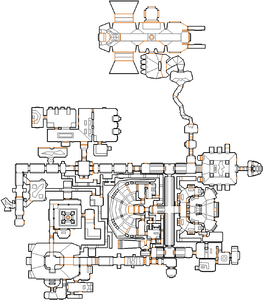 Map of Invasion... Level 2: The Upper Decks
Letters in italics refer to marked spots on the map. Sector, thing, and linedef numbers in boldface are secrets which count toward the end-of-level tally.

This WAD features three built-in demos by the authors. All require Doom v1.666 to view them. The demos are:

* The vertex count without the effect of node building is 4078.