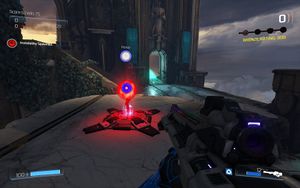 An invisibility has spawned in Empyrian. 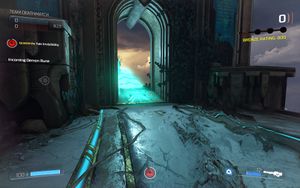 The visual effects of invisibility.
This article is about the power-up in Doom (2016). For other versions of this item, see:

Invisibility is a power-up which occurs only in the multiplayer mode of Doom (2016). It is a new version of the classic partial invisibility item, having a similar appearance - it takes the form of a levitating eyeball with red sclera and a blue iris which glances around in random directions. Taking the invisibility item renders a player transparent, distorting the background behind them slightly as though their body is a lens. The effect is similar to that originally seen in the 1987 science fiction/horror film Predator, and is more or less the same as the effect used by the game's spectres.

Like all multiplayer power-ups, invisibility will spawn at random at a power item spawn point in levels where it is configured to appear. Its arrival is announced, and a point-of-interest icon will point toward the location of the item until a player takes it. Once a player possesses it, their status is displayed in the HUD.