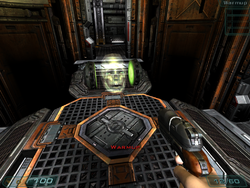 The appearance of the invisibility power-up. 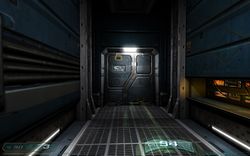 The effect of invisibility from the player's point of view.
This article is about the power-up in Doom 3. For other versions of this item, see:

The invisibility power-up in Doom 3 is a multiplayer-only item, occurring in most of the multiplayer maps of the original game and those added in the Resurrection of Evil expansion. When picked up, the player who collected it will become translucent for 30 seconds, making them difficult to see. The status of the power-up is reflected through the player's first-person view of their active weapon, which also becomes translucent. The item respawns every 60 seconds.