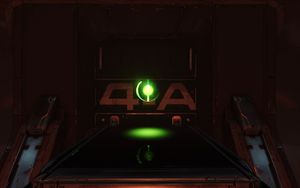 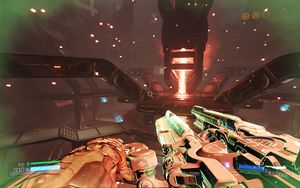 The visual effects of invulnerability.
This article is about the item in Doom (2016). For other versions of this item, see:

Invulnerability returns as a power-up in Doom (2016), taking on its classic form as a green levitating orb with a skull faintly visible within. According to the UAC, the invulnerability sphere is a demonic stimulant made of Argent plasma which is absorbed on contact, forming a bioplasma film below the user's skin which protects from almost all attacks for a limited time. Also according to UAC research, use of the invulnerability sphere causes extreme pain that, in demons, causes them to be more likely to attack targets beyond their combat abilities.

Invulnerability grants a brief period of invincibility against enemy attacks. As in Doom 3, the effect is not absolute, and instant-death sources of damage such as lethal falls and crushing objects can still kill the player. While the sphere is active, the player's view is slightly obscured at the fringes by a green haze, and a greenish light can be seen as a sheath over the player's weapons.

The invulnerability power-up is not available for placement in SnapMap. Regeneration is the closest available item in that mode.