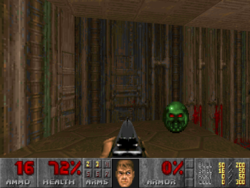 An invulnerability found in Doom II MAP08: Tricks and Traps. A view of Hell Revealed MAP14: City in the Clouds after obtaining an invulnerability.
This article is about the item in the classic Doom series. For other versions of this item, see:

The invulnerability is a powerup that makes the player generally impervious to damage. The player is not protected from telefrags, and will still recoil from a successful attack. The powerup looks like a green sphere with a grinning red-eyed head inside. While it is active in Doom and Doom II, the colors in the player's view change to inverse monochrome (with the exception of the sky, which remains unchanged), and the eyes of the status bar face glow yellow (STFGOD0), making them look similar to the demon's. The inverted monochrome display makes the game effectively fully bright, and the player will be able to see every detail even in the darkest areas. Spectres in particular become much more visible under its effects. In Doom 64, where the powerup looks extremely similar minus the red eyes, the effect on the other hand causes a brightness filter to be applied to the screen, allowing the environments and actors to largely preserve their colors.

Invulnerability lasts for 30 seconds; in the last few seconds the display will begin blinking back to its original colors. Picking up an invulnerability before a previous one has expired resets the duration to 30 seconds.

Invulnerability can also be activated with the cheat code idbeholdv.

In deathmatch mode of vanilla Doom, invulnerabilities and blur artifacts never respawn. Some source ports allow flags to be set to cause them to respawn.

Invulnerabilities are included in the items percentage displayed at the end of each level.

According to the function P_DamageMobj in p_inter.c, invulnerability only protects the player from attacks doing less than 1000 points of damage; while no monster in the game can do nearly that much damage in one attack, a telefrag inflicts 10000 points (and indeed will kill even an otherwise invulnerable player). This also means that DeHackEd can be used to circumvent the invulnerability powerup by creating incredibly powerful weapons. An invulnerability is available in the starting room of Doom 64 MAP28: The Absolution.

In the IWADs the invulnerability is first encountered on these maps per skill level:

The IWADs contain the following numbers of invulnerabilities per skill level: 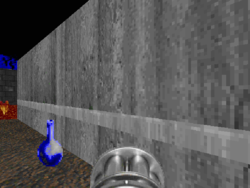 The early invulnerability powerup, as seen in MBF's emulation of the Doom press release beta.