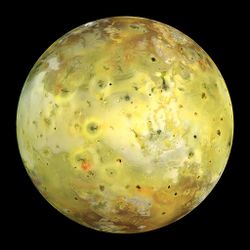 Io (/ˈaɪ.oʊ/) is the innermost and third-largest of the four Galilean moons of the planet Jupiter. In the Doom series, Io features as the setting of TNT: Evilution, one of the two episodes of Final Doom created by TeamTNT. Slightly larger than the Moon, Io is the fourth-largest moon in the Solar System, has the highest density of all of them, and has the lowest amount of water (by atomic ratio) of any known astronomical object in the Solar System. It was discovered in 1610 by Galileo Galilei and was named after the mythological character Io.

Io is remarkable for its extreme volcanism, which is responsible for many of its unique features. Its volcanic plumes and lava flows produce large surface changes and paint the surface in various subtle shades of yellow, red, white, black, and green, largely due to allotropes and compounds of sulfur.

In TNT: Evilution, the UAC, under the strict supervision of the United States government, built a base on Io dedicated to continuing the UAC's prior research into teleportation. It was hoped that the increased distance from Earth, relative to Mars, would help protect humanity in the event of another catastrophe. Once gate research resumed, the demons' attentions were drawn to the base and they repeatedly attacked it, but were successfully driven back several times by a detachment of marines from the United States Space Marine Corps.

Ultimately, however, a strange Hellish spaceship appeared in the orbit of Io and monsters poured down onto the moon from its skies, overwhelming the base completely. The Doomguy happened to be on the installation at the time, and was out for a walk when the invasion occurred. When he made it back, everyone else was already dead, and he took it upon himself to once again stop the invading demons.

The depiction of Io in TNT: Evilution is not elaborated upon extensively and does not closely match its real-life properties.