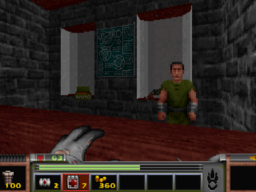 Irale has some contraband to offer at his shop in Tarnhill.

Irale is a minor character in Strife. He is an underground weapons dealer and fixer for the Front. He is unvoiced and does not have a portrait, since he acts as a shop keeper.

Irale can be found in Tarnhill, although the player cannot reach him initially through normal means until talking to Macil. His shop is nestled in an out-of-the-way corner behind the weapons shop, behind an inconspicuous locked door with the appearance of a mere storage room.

Irale is the Front's "fixer", a black-market weapons dealer from whom the player can buy assault rifles along with bullet ammo. Later on, he can train the player's accuracy once just before the player goes to the sewers.

When Weran's task is completed, Weran gives the player flamethrower parts that can be given to Irale, allowing him to build a modification of the crusader's flamethrower which can be wielded by a human. After the Order's castle has been seized and the Programmer is dead, Irale will begin selling poison bolts and phosphorous grenades as well, the liberation of Tarnhill having made these dangerous supplies easier to traffic.

Care should be taken to never discharge weapons in Irale's shop. Although he acts as a shop keeper, unlike most he is not invulnerable since he uses the peasant's actor. If Irale is killed, the game can still be completed, but all of his services will be lost.