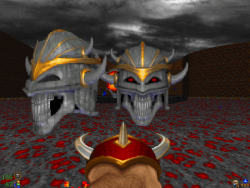 Iron liches are enemies in Heretic. Despite their names, iron liches are not the typical skeleton-like foes in robes to which others may be accustomed. They are instead giant, helmet-wearing skulls made of iron. Iron liches have the ability to cast three different kinds of elemental spells, all of which can inflict multiple hits:

Iron liches are first encountered at the end of the first episode of Heretic: City of the Damned. They will appear as normal or sub-boss enemies in later levels (beginning in a secret area of The Lava Pits), and a large group of iron liches guards the exit in the last level of The Ossuary, the fourth episode of Heretic: Shadow of the Serpent Riders.

The iron lich cannot be transformed by the Morph Ovum, nor immediately killed with a firemace under the influence of the Tome of Power. Despite what their appearance might suggest, they are incapable of flight. When killed, they sometimes drop a Claw Orb or Morph Ovum. With their extremely slow speed and relatively large size, the weapon of choice to kill them is the Phoenix Rod, which can dispatch a lone iron lich from a safe distance with five or fewer shots. In addition, the rod's splash damage enables it to take out a group of iron liches with considerably less than five shots per lich. Note that iron liches take half damage from the powered up Dragon Claw, though not from the rippers it shoots out. Each iron lich possesses 700 hit points.

The shadowsphere has increased utility when facing an iron lich: it both prevents the tornado attack from homing in and grants a little extra protection against direct hits by the ice clusterbombs.

In the IWADs the iron lich is first encountered on these maps per skill level:

The IWADs contain the following numbers of iron liches per skill level: