Jägermörder 2: Terra Nova is a single-level PWAD created by Derek MacDonald (Afterglow). It uses an unnamed music track by Jeremy Doyle from Requiem MAP15 and is the sequel to Jägermörder 1: Chemical Lab.

During the 2005 Cacowards ceremony it received the Mordeth award for taking six years to develop one level. 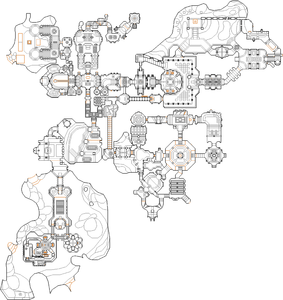 Map of Jägermörder 2: Terra Nova
Letters in italics refer to marked spots on the map. Sector, thing, and linedef numbers in boldface are secrets which count toward the end-of-level tally.

* The vertex count without the effect of node building is 16853.