This level occupies the map slot JRPG. For other maps with a non-standard slot, see Category:Non-standard map slots.

JRPG: JRPGVille is the eighth map of Reelism. It was designed by FireSeraphim and uses the music track "". 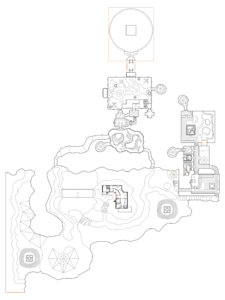 Map of JRPGVille
Letters in italics refer to marked spots on the map. Sector, thing, and linedef numbers in boldface are secrets which count toward the end-of-level tally.

This map is loosely inspired by the classic JRPGs of the 16 bit era, although parts of the map actual layout geometry takes some inspiration from later (and lesser known) Role Playing Games, the outdoor section in particular being loosely inspired by Quest 64's first overworld area. The map was originally going to have one of three classic summons from the Final Fantasy series aid the player for its Easter egg reel (Namely Ifrit, Ramuh or Shiva) before that idea was cut due to practicality concerns.