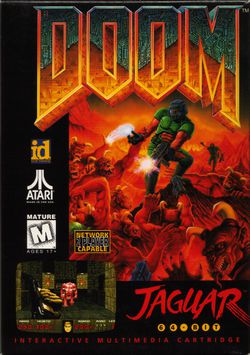 The Jaguar version of Doom was published by Atari on November 1, 1994, and was developed by id Software. Like the PC version, this version of Doom was developed on the NEXTSTEP platform, and compiled to run on the Jaguar. The bulk of the engine was programmed by John Carmack, while Dave Taylor handled the multiplayer code. Unlike most console ports, the source code of the Jaguar version is available. This version was the first official port of Doom to begin its development cycle, although the 32X version was released first. Heavily optimized for execution in a limited game console environment, this port became the basis for most others: the 32X, 3DO, GBA and PlayStation ports are all derived from it.

Differences between the Jaguar and PC versions[edit] 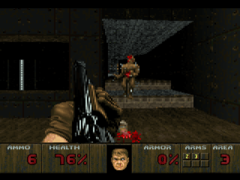 A screenshot from the Jaguar version of Doom. 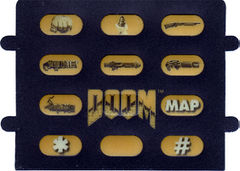 This version of Doom only features one continuous "episode" like Doom II, as opposed to the three episodes in the PC version. Unlike Doom II, there are no text intermissions to separate the game into segments, although the sky does change after MAP08 and MAP19. 22 of the 27 maps from the PC version are featured, although all have been modified, some significantly, along with two new maps. The missing maps are Tower of Babel, Hell Keep, Slough of Despair, Dis and Warrens. To add a slight bit of confusion, the two new maps take the names Tower of Babel and Hell Keep, while Fortress of Mystery has been renamed Dis in this version.

As mentioned above, the maps are modified from their originals. They typically use less texture variation and have simpler geometry versus their PC counterparts. For some of the larger maps, entire portions of their layout have been removed. In addition, crushers are no longer present in any of the maps. Despite using fewer textures, many maps now have entirely new texture themes, and several new textures have been added. Some of these textures are taken from Doom II, but others are new to this version.

The cyberdemon and spiderdemon monsters are not present. Spectres are still included in many maps but are rendered normally, without the partial invisibility effect, which makes them indistinguishable from demons. The partial invisibility and light amplification visor items have been removed from any maps that originally featured them. Interestingly, MAP24 still has a partial invisibility thing, but it is flagged to only appear in multiplayer and that map is not available from the area selection menu. Health and armor bonuses now give two points instead of one, but about half of them are removed from the maps.

The use of the Jaguar's luma/chroma-based 16-bit CRY color format results in an overall darker image (due to shading to black) compared to the RGB-based PC version and offers significantly smoother depth shading. However, for performance reasons this version uses double-width pixels, effectively halving horizontal resolution. This is especially noticeable on first-person weapon sprites.

The Jaguar version is the only console port that does not feature any music during gameplay. This is because Jaguar's mathematics co-processor DSP chip also handles playing music. As Doom uses the DSP for most of the collision detection and other things, the DSP does not have enough free cycles to process music while running the other game functions. The port does, however, have music for the title and intermission screens. Possibly due to lack of music in the maps, the intermission screens feature renditions of selected tracks from the PC version soundtrack instead of a dedicated intermission track.

Given the Atari Jaguar controller's large number of buttons, this version is the only console port with direct access to all weapons, instead of cycling through as in other console versions. As a bit of a trade-off, this version does not have dedicated strafe buttons, instead C must be held along with a direction.

This version has a 2 player mode for cooperative play and deathmatch via JagLink, a proprietary network interface that was separately released for the console.

The status bar has been redrawn. It is now brown, larger and rearranged compared to the PC bar, and no longer features the ammo totals panel. Instead, an area counter panel now shows the number of the map you are playing. When playing multiplayer the arms and area panels are replaced by your frags and his frags panels, his frags showing your opponent's number of frags.

This version does not allow saving during maps, but will remember any map completed. The player can choose to start on any map that has been completed from the main menu. 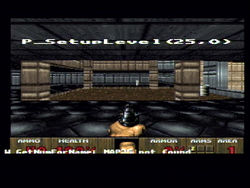 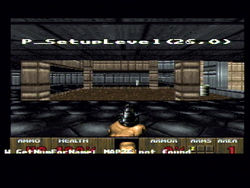 The file in_main.c of the source for this version contains definitions for two more maps, Fortress of Mystery and Warrens, which are commented out. Seemingly both maps were planned to be included. A hint for this can be found by using the level warp cheat. This cheat uses the numbers on the gamepad, and they work for all 24 maps. If one tries this for MAP25 or 26, the game crashes with an error message. This does not happen if one tries it with numbers 27 and up.

Code in the function P_DamageMobj always sets the status bar to display the f_hurtbad "special face", also known as the "ouch face," when the player takes more than 30 damage. However, this is done even if the player is currently invulnerable. Due to this, the ouch face displays on the status bar when the player would take more than 30 damage while an invulnerability sphere is active, even though no damage is taken.

Keyed door linedef types 99, 100, 105, 106, 107, and 108 leave the type field of the door thinker structure uninitialized. These door linedef types, which are unique to Jaguar-based ports, thus have randomized behavior after they reach the top of their motion - they may or may not close back after a set amount of time. This can occasionally trap the player inside areas where there is not a door action to escape from the inside, such as some of the keyed door closets on MAP22.

The violent gibbing death face for the status bar, which does display in the 3DO version of the game, is meant to appear in this version as well. However, the code meant to show the face has two bugs:

An Imp is placed outside of the map boundary behind the exit switch, making it impossible to get 100% kills.

The secret area that branched off the crusher hallway in the PC version is still present in the map, but completely inaccessible. Due to this it is impossible to get 100% kills or secrets.

The red key door does not actually require a key to be opened. This was later corrected in the PlayStation version of the map.

The secret that requires yellow key cannot be opened at all, though the yellow key can be found, as the special action for the wall was removed. Chainsaw and supercharge are still in that secret, so getting 100% items and secrets on the level is impossible.