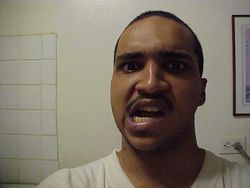 Jason Masihdas
Jason "Amaster" Masihdas (also known as "Assmaster") was an active member of the Doomworld community and moderator of the Doom 3 forums. He was a member of Unidoom, as well as a Unidoom Radio show host. He also contributed maps to several speedmapping sessions.

On June 24, 2007, after a community effort to track him down during a 10-day absence, it was confirmed that he had committed suicide on June 14.

Jason was born on October 12, 1981. He grew up in Pelham Bay, Bronx (off the last stop on the 6). He went to the Bronx High School of Science, where he became the epicenter of a group of kids who hung out across the street on Harris Field. It is during this time that he registered the e-mail address AssMaster@RocketMail.com, which later lead to the "AMaster" nickname.

After leaving Bronx Science, he qualified as a New York State Real Estate Agent and worked for Willie Kathryn Suggs Licensed Real Estate Brokers helping to sell real estate throughout Harlem. He then went on to complete an Associate's degree at Gibbs. He soon began working as a graphics artist at a small firm specializing in presentations for Pfizer pharmaceuticals. After leaving this job, he worked as a freelance graphics and web designer.

Jason did not leave the city much but did travel to Albany, New York; Ontario, Canada; Seattle, Washington; and an occasional camping or canoe trip, although he hated the country.

He is survived by his mother, two younger brothers, and his cat "Charlie", whom he spoiled rotten.