Jenesis is a 2011 megawad for Doom II by James Paddock (Jimmy). It was one of the winners of Doomworld's Cacowards for 2011. 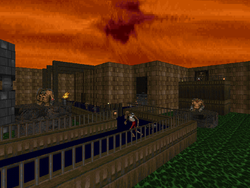 Jenesis' goal was to retain the classic feel of not just the original Doom and Final Doom games, but that of popular megawads like the Memento Mori duology, Hell Revealed, Alien Vendetta, Requiem and Scythe, and often to mesh these themes together to create nostalgic yet modern-looking maps.

Other PWADs whose aesthetic and gameplay styles are to be imitated in Jenesis include Scientist 2, Demon Eclipse and Whispers of Satan.

The maps were also speedmapped, with a view to getting them done in the shortest amount of time possible. The author decided this would be a good way of exercising his single-player mapping skills, and of actually making sure something he started actually got done.

The project was started during Vela Pax's development, with Brett Harrell (Mechadon), its creator (and leader of the Supplice project), being one of the beta testers for Jenesis. Both Vela Pax and Jenesis were started by their creators to serve as a warm-up exercise before the mapping phase of Supplice began - a project which is to be a fairly large-scale megawad led by Mechadon, and is to sport lots of original content.

Jenesis was released in three stages:

Part 1, subtitled "Descent", was mapped between 23 and 31 October 2010. After an extensive testing period, it was officially released to /idgames on 24 January 2011.

Part 2, subtitled "Beyond", was started on 17 December 2010. It was released to /idgames, after much testing, tweaking and procrastinating, on 3 May 2011.

Part 3, subtitled "Abysm", was started on 9 April 2011. As it is the full 32-map edition of the megawad, it is considered the final release, and was uploaded to /idgames on 28 November 2011 as Jenesis.

Since then, further updates to some maps were released in jenefix.wad, most recently on 13 September 2013.

Mutant
A former human with a helmet and increased health and movement speed. Wields a shotgun. Replaces the Wolfenstein SS.

This WAD features three built-in demos. All require Doom II with a Boom-compatible v2.02 source port to view them. The demo levels are:

The DSDA episode records for Jenesis are: