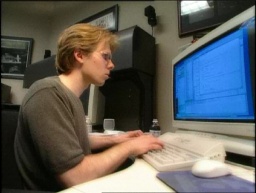 John D. Carmack II (born August 20, 1970, 51 years old) was the lead programmer at id Software and one of the company's co-founders. He created the Doom engine and the engines for all other id releases until his departure in 2013.

John Carmack grew up in Shawnee Mission, Kansas, part of the Kansas City metropolitan area, and became interested in computers at an early age. He graduated from Shawnee Mission East High School, then attended University of Missouri–Kansas City for two semesters before dropping out to work as a freelance programmer.

Shreveport, Louisiana software company Softdisk hired Carmack after a series of successful contract assignments, uniting him with John Romero and other future members of id Software. Afterwards most of that team left Softdisk to form id Software; in particular, Carmack had created a breakthrough demo of smooth 2D scrolling under MS-DOS which the team considered "too big" for Softdisk. A prototype of Super Mario Bros. 3 using this technology was created and pitched to Nintendo, but they declined further development due to lack of interest in the PC market. In 1990, Carmack, Romero, and others created the first of the Commander Keen series, which would be published as shareware by Apogee Software from 1991 onwards.

Carmack's most recognized accomplishments are in programming first-person shooter games. He was the main developer of several seminal titles including Wolfenstein 3D, Doom, and Quake, as well as their newer followups (including Doom 3 and the rest of the Quake series). He has invented several graphical rendering algorithms, notably surface caching and Carmack's Reverse. Carmack's engines have been licensed for use in other influential action games such as Hexen, Half-Life, and Medal of Honor: Allied Assault.

Carmack works to promote open source philosophy and fan feedback in his game designs. When the source code to Quake was stolen and circulated among the Quake community underground, a programmer unaffiliated with id Software used it to port Quake to Linux, and subsequently sent the patches to Carmack. Instead of pursuing legal action, at Carmack's behest id Software used the patches as the foundation for a company-sanctioned Linux port. In 2009, Carmack posted to the Doomworld forums to solicit players' input on the mechanics of the then-upcoming Doom Classic.[1]

Carmack is also noted for his generosity to charities and gaming communities. Some of the recipients of his charitable contributions include his former high school, promoters of open source software, opponents of software patents, aerospace research, and game enthusiasts. In 1997 he gave away one of his Ferraris as a prize to the winner of the Quake "Red Annihilation" tournament, Dennis "Thresh" Fong.

Though Carmack is best known for his innovations in 3D graphics, he is also a rocketry enthusiast and the founder of Armadillo Aerospace.

On November 13, 2019, Carmack reduced his involvement with Oculus to become their "consulting CTO" in favor of independently researching artificial general intelligence from home.

Carmack met Katherine Anna Kang after she visited him at the id offices with a friend during QuakeCon '96. They married around January 2000 and have a son, Christopher.