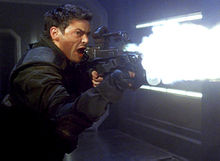 Staff Sergeant John "Reaper" Grimm is a character in the 2005 Doom movie played by Karl Urban. He is the son of UAC scientists who were killed in an accident during the early excavation of a Martian dig site. Reaper abandoned his scientific heritage and joined the military to forget about this personal tragedy, eventually becoming a member of the elite Rapid Response Tactical Squad, or RRTS. Among the characters in the movie, Reaper most closely resembles and represents Doom's protagonist.

Grimm, his commanding officer Sarge, and the other members of the RRTS are dispatched to the UAC Olduvai Research Facility to investigate the disappearance of several scientists, where they confront humans who have mutated into demon-like creatures after being injected with an artificial 24th chromosome created from an ancient Martian retrovirus. Grimm is plagued by guilt over his parents' death, and is distracted by concern for his sister, Dr. Samantha Grimm, who is a researcher at the facility.

Grimm clashes with Sarge due to the latter's increasing hostility, aggression, and irrational bloodlust, and John's own high moral standards. This is particularly the case after Sarge callously executes The Kid, a fresh newbie, for insubordination after Sarge orders the mass murder of civilians in the quarantine zone in order to stop the spread of the infection. Grimm and The Kid's conflict with Sarge in this manner is an allusion to the original back story of Doom, in which the Doomguy confronts and assaults his commanding officer for ordering him to fire on civilians.

Near the film's climax, Grimm is fatally wounded and injected with the chromosome by his sister to save his life. Instead of becoming a monster, Grimm is granted superhuman strength, reflexes, and regenerative abilities. These new abilities allow him to single-handedly mow down a horde of monsters, presented in the film in first-person perspective as a direct homage to the film's roots. Grimm is eventually attacked by Sarge, who was also accidentally infected with the experimental chromosome in an earlier monster attack, and mutated into a hideous monster. Grimm manages to force Sarge back through the Ark teleporter, and tosses in a grenade after him, killing him. He then leaves the base as sole survivor of the RRTS, with his nearly unconscious sister in his arms.