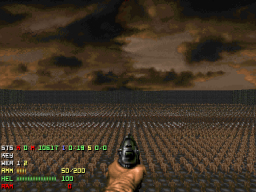 nuts.wad is an example of a joke WAD

A joke WAD is a WAD file which is made as a joke. In some cases, a level may be so bad that it is hard to tell whether it is merely badly designed or a joke WAD of some sort, such is the case for wow.wad.

Joke WADs may take one of several forms:

The Mockery TC was started in 1998 to parody other WADs that were full of poor design and bad attention to detail. Screenshots that were released demonstrate techniques such as huge rooms with long-distance projectile throwing monsters and mix-and-match slime and blood walls and floors.

The Mockery TC was never finished and is considered long-abandoned. This may be due to a lack of interest in the project (the joke having been delivered without having to complete the WAD), or perhaps it was deliberately abandoned, as a reference to the long tradition of unfinished TCs.

Mock 2: The Speed of Stupid is an unofficial sequel to Mockery which was released and was designed to not look like a serious wad (but remains fun to play). Techniques employed include using levels randomly generated by Slige. This megawad contains 41 levels (31 thru 40 are a connected chain of secret levels; 41 is the "ending" level).

The New Adventure is a megawad inspired by Mock 2 designed to be even funnier, though not as successful. All levels in it were designed completely by Paul Corfiatis.

Nuts by B.P.R.D contains 10617 monsters in two rooms and is almost unplayable as a result. It is featured in Doomworld’s Top 10 Infamous WADs and also in their Top 100 Most Memorable Maps, placing 4th. Several sequels and homages have also been created.

NOTE: Nuts has been proven possible to play, and easily beat by the utilization of source ports and monster infighting. If the player is not concerned about 100% kills and is using a port that disables infinitely tall monsters, the level is relatively easy; all the player has to do is straferun over the heads of the first wave of monsters until reaching the exit arena, and then surf on arch-vile blasts to the exit switch.

The original dwforums joke WAD was created to parody the community which centered around the Doomworld forums. It was popular enough to warrant two sequels. The first lampooned the #zdoom IRC channel and was released on Doom's 10th birthday. The second was designed as a re-enactment of events that took place on the Newdoom forums.

The series was released anonymously, but according to a post made by Andrew "Linguica" Stine in 2006, Mike "Cyb" Watson created the first two dwforums WADs. Linguica stated that he himself made the third with some help from Cyb.[1]

Some joke WADs use funny sounds, funny sprites or funny environments, for example the first versions of Kansam's Trial heavily uses funny sounds in normal Doom levels. These are notably almost universally banned from inclusion in the /idgames archive due to copyright issues. The Bikini Bottom Massacre WAD based on the Nickelodeon animated series SpongeBob SquarePants was also removed from the ModDB archives per a DMCA request from Viacom, likely out of objection to the violent portrayal of SpongeBob characters in a mass murder scenario.[2]