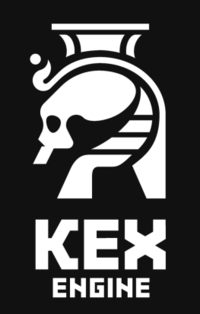 Official logo of the KEX Engine.

KEX 3, also officially known as the KEX Engine, is a proprietary cross-platform game engine framework originally created by Samuel Villarreal (Kaiser) for Nightdive Studios. It provides special support for the remastering of older titles, providing system abstraction layers and a broad range of interfaces to various libraries and platform APIs while remaining largely agnostic with respect to how game logic should function. This is exploited within Nightdive to bring aging titles rapidly up to date.

The KEX 3 engine is a mostly organic development from the older KEX 2 code base, though nearing a 100% rewrite even in its first revision. Continuing innovations include added support for a multi-threaded game loop allowing maximum GPU usage, support for the Vulkan rendering API, and portability to various console platforms.

It is notable for becoming the basis for the 2020 re-release of Doom 64.