KZDoom6, titled Hidden Valley of the Aliens, is a single-level PWAD for Doom II and the ZDoom source port that came out in December 2000. It was designed by Kurt Kesler as the sixth entry in his KZDoom mini-series. It uses the music track "DOOM" by Robert Prince and made it into the Top 100 WADs of All Time as an entry for the year 2000. 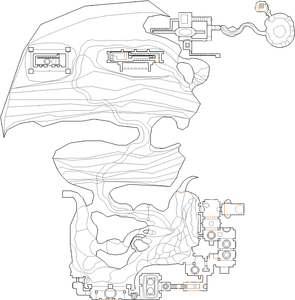 Map of KZDoom6
Letters in italics refer to marked spots on the map. Sector numbers in boldface are secrets which count toward the end-of-level tally.

* The vertex count without the effect of node building is 3049.