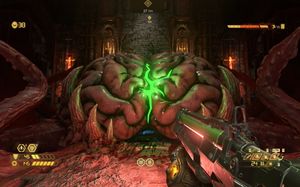 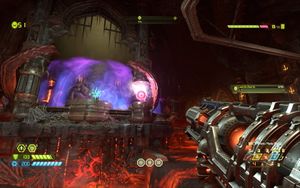 Engaging in battle with Kalibas. One of its eyes is about to fire.
"Constructed of stone and fell-steel on a foundation of countless corpses, the sprawling fortress funnels a constant stream of victims towards Kalibas, the Sightless Judge. This ancient demon is a rare breed, unable to communicate or move without great difficulty."
― Codex entry 'Nekravol - Part 1'

Kalibas the Sightless Judge is a unique demon which occurs in Doom Eternal. An integral part of the Nekravol, it is a large brain with many tentacles which is protected by a force field and several eye-like turrets, known as the Eyes of Kalibas. It serves as a judge of the souls of humans which enter the Nekravol, determining which are suited for conversion into Argent energy. Those deemed worthy proceed deeper into the facility to be tortured until their spirits are broken. The rest are discarded to the Blood Swamps, an area of Hell.

During his attack on the Nekravol, the Doom Slayer engages in battle with Kalibas. It attacks using its eyes as turrets which fire purple plasma projectiles, and its arena is filled with precarious platforms which either lower and raise out of the lava or have grates through which fire periodically spews. It is also defended by several pain elementals and gargoyles. Once the eyes have been destroyed, the shield surrounding Kalibas is lowered. The demon itself has no natural defenses, and the Slayer is able to destroy it completely with a single punch.