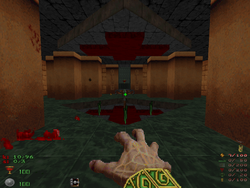 The retextured E4M1 of Heretic. 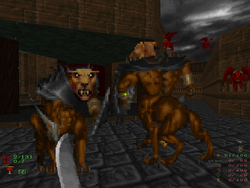 Maa'hes is assaulted by gargoyles and leonids on e1m2. 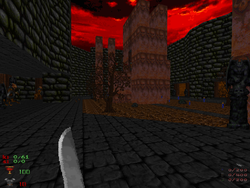 Leonid mercenaries await the player on the retextured Seven Portals.

Karnak is a gameplay mod for GZDoom developed and released by Mike MacDee (Impie) in 2017. It replaces weapons, monsters, and many textures for Heretic, Hexen, and Deathkings, transforming the medieval setting into that of mediterranean flavored sword-and-sci-fi. The motif was partly inspired by He-Man and the Masters of the Universe.

The player usually takes the role of Maa'hes, a lion-headed "leonid" who discovers he is the rightful prince of planet Karnak. The plot usually involves Maa'hes fighting intergalactic despots, either alone or with the help of other player characters.

KARNAK – For Heretic. The Beast King Marduk has come from a galaxy far, far away to conquer Karnak and the rest of the Khepri System. Using a combination of guns, magic, and brute strength, Maa’hes slays his way through 5 episodes to save Karnak and rid the cosmos of Marduk’s taint forever.

KARNAK 2 – For Hexen. After a lengthy inter-dimensional campaign, Maa’hes finally returns to his homeworld, only to find it on the brink of holocaust: a creature known as the Defiler is posing as the god of the Crimson Order, pushing the red-robed cultists to amass an unstoppable legion. Maa’hes gains two dubious allies: the scoundrel Gilgamesh, who favors non-magical weapons; and the serpent-woman Ren, who prefers magic attacks.

KARNAK: SCOURGE OF ABYDOS – For Deathkings. Maa’hes returns to Memphis to reclaim his birthright…and is promptly thrown in a cell for impersonating a monarch. His only chance to fulfill his destiny as ruler of Karnak is to stop the Dark Lord Nergal, dictator of Abydos, from poisoning the river and subjugating the leonid people.

Machete. Delivers one of four different swings, each slower and more damaging than the last. Powered up it attacks twice as fast.

GodHand. Maa'hes has this as his default ranged attack, firing a single blue beam by default, and three when powered.

Tripod Cannon. A belt-fed machine gun with steady rate of fire. It is not affected by the Tome of Power.

Laser Trident. A three-barreled laser gun best used in open areas. It is not affected by the Tome of Power.

Uraeus. The rocket launcher of the arsenal, this snake staff fires serpent missiles by default; powered up, it fires three seeker snakes at once, the deadliest attack in the mod even when compared to other weapons.

LightBringer. Replaces the Fire Mace, so it can be difficult to find. It fires bouncing light spheres by default, and nukes everything in sight when powered up.

In the Hexen-based mods, most of Karnak's arsenal is shared between the three heroes, with a few weapons exclusive to those characters. The class selected will determine whether you find conventional or magical weapons more frequently throughout the campaign.

Maa'hes is the leonid protagonist of the Heretic mod. He is based on the Cleric class and wields an even mixture of conventional and magical weapons, but uses the explosive Mage class flechettes, harkening back to his timebombs in the Heretic mod. He starts with the Machete, and obtains an upgraded GodHand as his ultimate weapon: it fires three beams by default instead of one, and fires five highly-damaging beams when powered up.

Gilgamesh is a sapien warrior, the most human-like species on Karnak. He is based on the Fighter class (and his flechette reflects this), with a focus on conventional weapons -- he tends to find guns early on, and uses little magic until late in the campaign. He starts with a pair of Kukri knives that are weaker than the Machete, but have a faster attack speed. His ultimate weapon is the Black Hole Generator, which sucks nearby monsters into a black hole that summarily crushes them to death.

Ren is a green-skin serpathor, based on the Mage class with a focus almost entirely on magic weapons, but uses the poison flechettes of the Cleric. She starts with the Staff of Lamia, firing twin beams that petrify enemies. Her ultimate weapon is the Rod of Hathor, arguably the most powerful weapon in the mod: it summons spheres that target and fire medusa beams at all enemies in view, potentially clearing large groups of enemies in a matter of seconds. Powered up it fires explosive suns that are better suited for use in enclosed spaces.

The only noteworthy powerups are the Lifeblood Goblet, which replaces the Quartz Flask and heals for the same amount; and the fact that the Tome of Power is now available in Hexen and Deathkings.

A few enemies remain unchanged: Gargoyles, Afrits, Buried Reivers, and Death Wyverns. The rest have been replaced with new monsters:

Leonid Mercenary. Replaces Golem, Sabreclaw, and Ettin. Lion-headed soldiers with an unnerving lunge attack that allows them to reach the player when he thinks he's safe. They attack with swords only, and ghostly versions are sometimes encountered.

Leonid Gunner. Replaces Slaughtaur. Slower leonids armed with the Tripod Autocannon, for which they always drop ammunition. Due to their hitscan attack they can be very deadly in large groups, but easily agitate other monsters.

Leonid Bruiser. Replaces Weredragon and Green Chaos Serpent. Large, maned, fireball-throwing leonids that use their shields to block and even reflect your attacks. They have a chance to throw up their shields whenever they attack or feel pain.

Crimson Warlock. Replaces Dark Bishop and is essentially identical, except with two additional attacks: a single homing fireball that tracks the player more efficiently than their regular attack, and a highly damaging claw attack.

Crimson Sheik. Replaces Heresiarch in Karnak 2. An extremely powerful Crimson Witch with a number of deadly homing missile attacks. When damaged he sends out waves of fire in every direction.

Pit Bitch. Replaces Disciple of D'Sparil. Winged harpies that can walk or fly, and spread burning agony everywhere they go. Annoying and deadly to the unprepared player.

Frost Bitch. Replaces Wendigo and is basically identical to the Pit Bitch, except ice themed. It fires frost shards and ice balls instead of fire, and explodes into icy fragments upon death.

Serpathor. Replaces Ophidian and Brown Chaos Serpent. Serpent women who wield a weaker version of the Uraeus: their snake missiles aren't as damaging but still have a splash effect when they explode. They also fire eye beams that can slow the player, and petrifies him if it lands a killing blow. If the player is petrified, the Serpathor will usually follow up with a snake missile to shatter him.

Deathking of T'almed. Replaces the Fighter, Cleric, and Mage bosses in Karnak 2. A four-armed revenant with a royal helmet and cape. It wields a number of spells, mostly fire based, and can resurrect certain monsters.

Bride of Marduk. Replaces Maulotaur in Karnak. A giant golden minotaur female with a devastating upgrade to the standard Maulotaur attacks.

Marduk. Replaces D'Sparil. A giant, multi-eyed alien demon with countless devastating fire-based attacks. When killed his power seems to overwhelm him as he self-destructs.

Defiler. Replaces Korax and behaves the same, except a few of his projectile attacks are upgraded, and he explodes dramatically when killed.

Lord Nergal. Replaces Fighter, Cleric, Mage, and Heresiarch bosses in Deathkings. Because he replaces all the bosses in Deathkings, he appears to harry the player throughout the game in several teaser battles before finally dying in the final showdown. He is a maned leonid with gray skin, gold armor, and a number of deadly magic attacks. He can also move and attack with his shield up, deflecting the player's attacks.