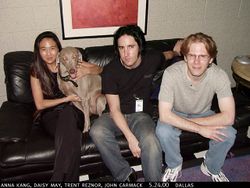 Katherine Anna Kang (born December 15, 1970) is an American businesswoman and machinima film producer.[1][2][3] She is notable within the context of Doom for founding Fountainhead Entertainment and aiding in the creation of the Doom RPG series of games.

In 2000, as founder and CEO of Fountainhead Entertainment, she championed machinima and became known as one of machinima’s biggest supporters.[4] Through Fountainhead Entertainment, she produced, wrote, and directed a variety of machinima pieces and co-founded the Academy of Machinima Arts & Sciences.[5] In Machinima For Dummies, the machinima piece Anna is mentioned as “… one of the top ten list of every prominent machinima maker in the world.”

While at Fountainhead Entertainment, Kang produced and designed mobile games for id Software,[6] in particular Doom RPG and the Orcs & Elves series. Orcs & Elves was eventually ported to the Nintendo DS, with Kang producing and designing.

Formerly, Kang was the Director of Business Development for id Software where she worked on Quake III Arena and various mission packs, as well as Quake II ports.[7] In 2008, she returned to id Software as President of id Mobile where she produced and designed Wolfenstein RPG and Doom II RPG.[8] She also produced the iPhone-only game Doom Resurrection. A 2014 article listed her as a "former director of business development at id Software", following her husband's departure from id in 2013.[9]

Kang married computer programmer and businessman John Carmack on January 5, 2000. In August 2004, Kang gave birth to their first child. Their second child was born in November 2009. Due to her involvement with id Software and John Carmack, she was mentioned in the final chapters of Masters of Doom. According to social media posts by John, the couple separated some time during 2021 and are now divorced.

Through Fountainhead Entertainment, Kang has won the following awards: