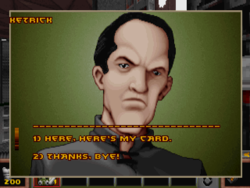 Ketrick demands to see the player's pass for the area. 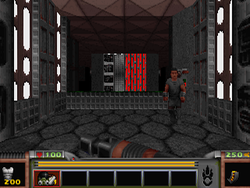 Ketrick is a character from Strife. He is the supervisor of the reactor core within Tarnhill power station.

In the part of the game, the player is carrying the ID of a former employee who died in the reactor core by falling into its coolant pool. Ketrick is the first and only worker in the area to see through the player's ruse, and will set off the alarm if he is conversed with. Despite his accuracy, he can be ignored completely; the player just needs to press the switch next to him to expose the power crystal. Killing Ketrick causes a few acolytes to be alerted—given they are still in place—unless the punch dagger or poison bolts are used. If he does not die in the blast from the crystal's destruction, he does not display any additional reaction to its destruction. Avoiding Ketrick is highly recommended when attempting the How Hard Can It Be? achievement in Strife: Veteran Edition, as he is the last obstacle that may set off the alarm before it is awarded.