Kick Attack! is a single-level PWAD designed by Tim Willits and released in March 1996. The level was created as a promotional operation (similar to Chex Quest) by RC Cola to help establish the now-defunct brand of Kick soda. Graphic and sound replacements are used to change the setting: the demons are replaced by various intruders sent by "Alpine Spew" (an obvious parody of the more successful brand Mountain Dew) to sabotage a Kick bottling plant.

In accordance to the theme, several things have been modified. These changes are cosmetic, only affecting visuals and sounds, but not the actor behavior.

Lounge singers
These has-beens roam around, trying to jab you with their microphone. They only know how to say "alright, baby", "take it, baby", and replace the demon.
Flying bottles
These two-liter bottles of Alpine Spew fly around, charge, and bite. They replace lost souls. Since lost souls and demons share their idle sounds, you can hear them say "take it, baby", too.
Giant can of Alpine Spew
A gigantic and vaguely anthropomorphic can, equipped with twin chainguns, this monstrosity replaces the spiderdemon and serves as the map's boss, guarding the exit switch. 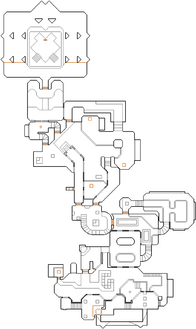 Map of Kick Attack
Letters in italics refer to marked spots on the map. Sector, thing, and linedef numbers in boldface are secrets which count toward the end-of-level tally.

* The vertex count without the effect of node building is 1218.

The contents of kick1.exe are as follows:

The contents of kick2.exe are as follows:

The idea of a promotional Doom level for helping establish Kick! as a beverage for gamers came from the marketing firms Digital Marketing Associates and Dryden and Petisi Promotions, LLC. Besides Tim Willits, Jay Wilbur and Mike Wilson of id Software, as well as James Monroe of Raven Software, helped the production of this project.

The custom graphics were created by Dean Camastro, Anthony Verducci, and Paco Levine, with the Sisson Design Group being contracted for additional graphics.