King1 (KING1.WAD) is a single-level PWAD for Doom II that is considered one of the all-time classic deathmatch maps.[1][2][3][4] It was released in November 1997 by Jason Yasuko together with King2 and King3 as the "King Deathmatch!" series. The latter installments did however not achieve quite the same prominence.

In 2013, King1 was one of the tournament maps at the 20th Anniversary Doom Challenge. 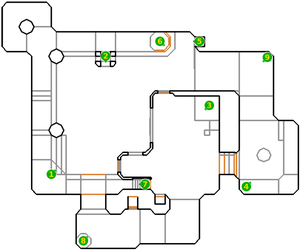 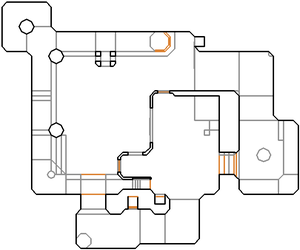 * The vertex count without the effect of node building is 286.

The map design was influenced by Jason's two favorite but opposing map styles with the Danzig, Dweller and Judas23 maps on the technically structured side, and the Mancerx maps on the other more free and open side. KING1 was an attempt to create a free-flowing map supporting fast movement and option selection that allowed players to determine their own style rather than simply "playing the map." At the same time, Jason introduced a level of structure and mechanics to the map to avoid the "just circle and shoot" syndrome to which the Mancerx maps were sometimes prone. The aim was to ensure these mechanics did not impede the speed and freedom of the map, so all doors and stairs on the map are fast, including a turbo lift. While the design aimed to ensure every area of the map provided the player with options, Jason loved spawn fragging and the map reflects this. Each player is guaranteed to both execute and suffer a series of spawn frags during a typical 10 minute match.