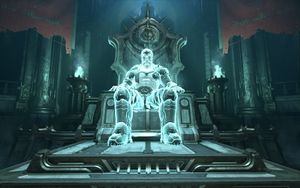 King Novik's spirit on his throne in Exultia. 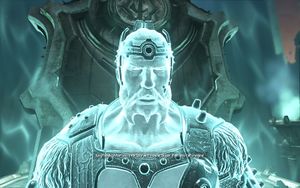 King Novik was the last sovereign king of the Night Sentinels who ruled during the coming of the Outlander to Argent D'Nur and the troubles which followed. He persists now, as many Sentinels do, only in the form of a spirit. He may appear to those who approach his long-abandoned throne at Exultia. King Novik is presumed to have died during the end stages of the Argenta civil war sparked by the Night Sentinels' discovery of the Nekravol and the betrayal of the Maykrs against the Argenta, in which he led the Sentinel loyalists against the forces of the Ascended Empire.

"They are rage, brutal, without mercy. But you, you will be worse. Rip and tear, until it is done."
― King Novik, in the introduction of Doom (2016) 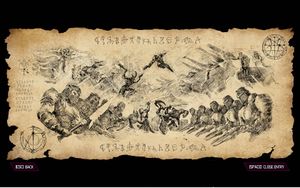 A page from the Ligra Sultagenta depicting the Argenta civil war. King Novik can be seen at right issuing orders from a rampart.

It is said in the Ligra Sultagenta that the rule of King Novik was a time in which the Argenta had secured "peace and safety through dimensions across time and space." The coming of the Outlander would mark an eventual end to this period, as Hell would soon attack the Sentinel worlds.

King Novik presided over the knighting of the Outlander, who later became the Doom Slayer. It was he who condoned the breaking of ancient tradition by granting this privilege to an outsider, silencing critics within the Sentinels by personally deeming the warrior worthy of the honor. The Signifiers then brought forth a commission for the Outlander at his command.

King Novik witnessed the introduction of Argent energy to Argent D'Nur, and he participated in its formal presentation to the Khan Maykr. This event is recorded in the engraving entitled, The Gift of Argent. It was also Novik who later accepted the plan brought forth by priests of the Order of the Deag for the elite of the Sentinels to attack the Nekravol. When the warriors, including the Doom Slayer, were then scattered and trapped within Hell by the priests, Novik is recorded to have lamented his decision to trust the priests one final time.

Though the Doom Slayer himself is considered a sovereign warrior king among the Argenta, at least up until his actions at Sentinel Prime against the Hell priest Deag Grav, it is apparent from his actions that the Slayer is still considered a subordinate to King Novik. When the Slayer enters the throne room at Exultia in pursuit of a component for the Celestial Locator, Novik appears to the Slayer, who demonstrates fealty by kneeling.

King Novik is skeptical of the Slayer's quest in Doom Eternal. He commands that the Slayer respect Sentinel law and not kill the Hell priests due to their holy Sentinel blood, even though they have committed many transgressions. He states that the Slayer's actions will bring down the wrath of the heavens. The Slayer demonstrates mute defiance by turning his back on the king, and even then only actively shows his offense once Novik crosses a line by declaring that the people of Earth are no longer the Slayer's to save.

It is notable that the contents of this conversation are oddly out of character for King Novik, who is otherwise known to have blessed the Slayer's conquests with various superlatives and inspiring commands. These are heard at the beginning of both Doom (2016) and Doom Eternal, as well as during Doom Eternal's ending, but the actual timing of these lines' delivery is unknown. It is possible that Novik, after his physical death, suffered a period of skepticism regarding the ability of even the Slayer to oppose the union of the Maykrs and Hell.