Knee-Deep in ZDoom (also known by the abbreviation KDiZD) is a ten level PK3 for The Ultimate Doom, designed for use with the ZDoom source port. The project was led by Daniel Gimmer (Tormentor667). It was first released on June 2, 2007 and at the 2007 ceremony it picked up a regular Cacoward as well as the Mordeth award. The final version of the mod was uploaded on June 16, 2012.

The PWAD is a reinterpretation of the original id Software's Knee-Deep in the Dead. A core concept of the mod was to expand the original levels by making full use of the power of Marisa Heit (Randi)'s ZDoom port, which adds features which are not possible under the original Doom engine. The levels have an atmosphere and design similar to Quake 2, with large tech bases and similar ambient sounds. 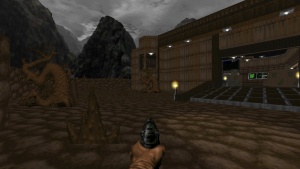 The beginning of KDiZD.

Knee-Deep in ZDoom makes use of DECORATE to provide an array of new monsters, mostly close variants on the original cast of creatures. Several came from the Monster Resource WAD but with new art and small tweaks. Many of these creatures have subsequently been featured in other modifications and even ported to other content definition languages.

Blood demon
A dark-red variant of the standard demon with metal legs and 300 hit points, twice as much as the standard demon. Killing them causes their right arm to fall off.
Chaingunner
These are mostly identical to the chaingunners from Doom II but with a new sprite set.
Chainsaw zombie
A chainsaw-wielding zombie in a brown suit, with 30 hit points. Drops the chainsaw when killed.
Dark imp
There are three variants of the dark imp, all of which have black skin and more hit points than regular imps.

Demon cube
A spinning cube with a demonic face on the sides, inspired by the guardian cubes from Demon Eclipse which themselves were monster versions of the spawn cubes. They shoot streams of small fireballs. 50 hit points.
Hell knight
These are simply Hell knights from Doom II, but with a new sprite set giving them a light-brown color.
Hell's fury
Grey-skinned and grey-legged Hell nobles with a head that resembles the lost soul from Doom 0.4. They have two methods of attack: either hurling a highly-damaging red baron projectile or shooting homing yellow skulls out of the sides of their head.
Hell warrior
Orange-skinned, tan-legged Hell nobles with lion manes, 400 hit points, and a shield that bears a resemblance to the floating eye symbol. They fling yellow baron projectiles, and occasionally defend themselves with their shield when they are hurt, temporarily becoming invulnerable. They may also fire a green ripping projectile from their shield. Killing them causes them to drop their shield (which you cannot pick up).
Mauler demon
A blood-red variant of the demon with pain elemental horns and a damaging charge attack and 150 hit points.
Nightmare
These imp-like creatures appear totally invisible until they get up close, then they start clawing at you, and only then can they be hurt. They have 100 hit points.
Rapid-fire trooper
A zombieman with a rapid-fire gun. They drop clips when they are killed. 30 hit points.
Rifle zombie
A shotgun guy-like zombie with brown stains on his armor. They shoot slow-moving bullets (that is, slow compared to hitscans) and drop rifles when they are killed. 40 hit points.
Rocket guy
A zombieman with a rocket launcher. Their low health (50 hit points) and powerful weaponry makes it easy for them to kill themselves and other nearby monsters.
Satyr
A small Hell noble with a goat-like head and dark brown skin and legs. They have 400 hit points and a powerful melee attack but no projectile attacks.
Shadow
An imp-like creature with a slouched posture, translucent grey skin, and large red eyes. It moves quickly, leaving a motion blur behind it. When it sights its target, it will stay positioned, hurling red balls of energy towards the target, until it is shot or until its target leaves its line of sight. Its behavior seems to be based off that of the level-2 imps from STRAIN. It has 80 hit points.
Soul harvester
A spiky, grey-skinned, emaciated imp-like creature with 100 hit points. Similar to Heretic's nitrogolems, they shoot yellow homing skull projectiles at their target (the same projectiles as those used by Hell's fury). Killing them causes a yellow spirit to rise from their corpse as their bodies deteriorate into skeletons.
Stone imp
A living stone statue in the shape of an imp. It doesn't bleed, has 180 hit points, and has a powerful melee strike but no projectile attacks. When it dies it splits and half and the legs fall backwards and the top falls forwards.

Bruiser demon
Named after the "bruiser brothers (id Software's internal name for the baron of Hell), and the penultimate boss of the game with 3000 hit points. They are dark orange-skinned, black-legged, with glowing red eyes, black horns on their upper body, and have three methods of attack: (1) a large, powerful, trailing fireball, (2) a volley of seven to fourteen smaller fireballs, and (3) a floor-hugging barrage of exploding fire similar to that of the maulotaur.
The Deimos Guardian / Magmantis
A massive, devil-like entity with two sets of arms. It rises out of a pool of lava immediately in front of the portal to the Shores of Hell, and creates red, swirling pools of energy above its head that shoot projectiles at its target, or spawn lost souls. It will also spawn Imps around the pool of lava. It has 15000 hit points (five times that of a spiderdemon) so the player is provided with a health bar to keep track of its remaining health.

Super shotgun
Functionally similar to the super shotgun from Doom II, but with a new sprite set.
Grenade launcher
Fires grenades that bounce off floors and obstacles before exploding. Standard shots will travel a short distance before hitting the floor, while alt-fire causes the grenades to travel much further forward. This weapon shares ammo with the rocket launcher.
Rifle
Replacing the BFG9000, this weapon fires a single powerful bullet. Ammo for this weapon is limited so save it for tougher enemies.