Knee-Deep in the Dead

(Redirected from Knee Deep in the Dead) 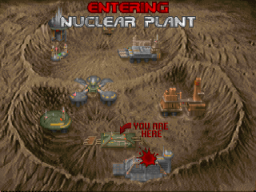 The intermission screen with a visual presentation of all the Knee-Deep in the Dead levels.

Knee-Deep in the Dead is the first episode in Doom and The Ultimate Doom, and the only episode in the shareware version. The episode takes place in the UAC installations on Phobos, one of the moons of Mars.

Designed mainly by John Romero, the levels have a unique graphical style characterized by extensive use of STAR textures, large amounts of highly saturated brown and green in general, and a misty, mountainous skyline.

Because of Episode 1's singular inclusion in the Doom shareware version, the Episode 1 style levels have become one of the most popular and easily recognizable Doom design themes. Fan-made levels utilizing exclusively Episode 1 textures, and often emulating Episode 1's play style, are commonly referred to as techbase maps.

His fellow Marines dead or possessed, the Doomguy must fight his way through the various UAC buildings, each overrun by demons and zombies. Finally, he reaches the Anomaly, the portal to the interdimensional gateway between Phobos and Deimos, and there defeats the powerful Barons who guard it. Unfortunately, the only place to go next is through the gateway to Deimos, which is even more strongly controlled by the forces of Hell.

The majority of single-map strategies also work in episode runs, although the most hazardous tricks (such as rocket jumping on E1M4) are avoided even in Compet-N recordings, for reasons of simple arithmetic. First, whereas a single-level recording almost always finishes under 50% health, one cannot survive seven or eight consecutive levels without adopting a more conservative approach, or at least making a lot of detours to health pickups. Second, even world-class players sometimes need hundreds of trials to meet their own standard of quality for a given map, and that number would grow exponentially with the number of maps in a run, if exactly the same routes were used.

See the individual walkthroughs above for specific tips.

The Compet-n records for this episode are:

The DSDA records for this episode are: