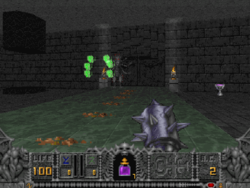 Korax shooting a group of fireballs at the player. 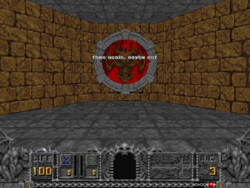 Korax taunts the player at the start of every hub, sometimes in cryptic messages. 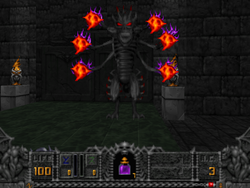 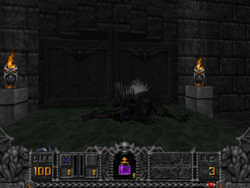 Korax is the second Serpent Rider and the final boss of Hexen that you have to face in the Dark Crucible. Not at all humanoid as D'Sparil is, he has six arms, red eyes, a demonic skeletal face, and a long tail. He has 5000 hit points. According to the manual:

"You have seen inhuman shapes before this, but surely even hell would never spawn such a being as Korax; his very presence fills you with horror, and you cannot begin to imagine what powers are contained within his twisted frame."
― Hexen instruction manual

Korax also appears at the beginning of each hub, with the exception of the Winnowing Hall—though he appears at the start of Seven Portals, the level after Winnowing Hall—where his visage will emerge from a wall of fire to taunt the player. His face will then fade from the wall, and the wall itself will vanish allowing the player to proceed into the hub itself. These taunts were voiced by Tim Moore.[1]

Korax is no laughing matter: with a boastable amount of HP and an array of traps and attacks, one who faces this boss should use every single item at their disposal, as there is nothing to use it on afterward.

In the beginning, the player should get used to Korax's most significant attack: his six-shooter. Korax will fire one of the various projectile attacks used by enemies throughout the game from each of his six arms. Being hit by all six projectiles will more than likely kill, even with full health. Korax moves extremely slowly, keeping him relatively stationary.

Korax has the ability to manipulate the arena through the use of several traps. When he raises his right arms and releases a bolt of lighting, any one of these things will occur:

Once Korax takes enough damage, he will teleport away and release two waves of other monsters from either side of the room, revealing no fewer than sixteen ettins in each chamber, for a total of thirty two. These small rooms each hold Crystal Vials and a Krater of Might. Kill the ettins, and the barriers behind the rooms that housed them will open as well, leaving you to deal with thirty two centaurs. Kill them and the door in the back of the room will open revealing the second hall where Korax awaits once again.

In addition to the above attacks, Korax can also now do the following:

When he dies, six spirits will burst out of Korax's stomach and roam around, and the exit portal leading to the end of the game will be open at the end of the second hall.

The ghosts that burst out of Korax upon his death will cause damage to you if you get too close. They function just like ghosts from the Wraithverge, but they will not target you, so if you stay back you will be safe.

The player can leave the level without killing any other monsters in the second room other than Korax himself, so it is not necessary to defeat all of the remaining enemies unless they are directly in the way.

Korax will always teleport in the order detailed above, although he can sometimes teleport in rapid succession. It is advised to learn the path so that it becomes easier to target Korax. But be aware that he can telefrag you if you are on his landing spot.

It is recommended to try to kill Korax in the second hall before he opens the doors releasing the chaos serpents and/or dark bishops making your mission that much harder.

Once the player enters the second hall, the doors leading back to the bridge at the start of the map will close, preventing them from using the switches to get mana. Hence it may be advantageous to not move into the second hall at all during the battle.