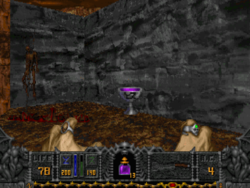 The Krater of Might is an artifact in Hexen, appearing as a silver chalice/goblet inscribed with arcane letters and filled with purple liquid. When used by the player, all blue mana and green mana will be fully restored to the player.

In the IWADs the krater of might is first encountered on these maps per skill level:

The IWADs contain the following numbers of kraters of might per skill level: