L'agonie Finale is a single-level PWAD for Doom II that was released in February 2018. It constitutes the bonus level to wrap up the French 3 heures d'agonie trilogy and is compiled of seven speedmaps designed by prominent contributors to the series: William Huber, Jean Bon (Jambon), Franck Livolant (franckFRAG), Roofi, JC Dorne, Arnaud Florian (Oxyde), and Maxime Bisiaux (Datacore). It uses the music track "Monuments of Treason" by Psychedelic Eyeball. 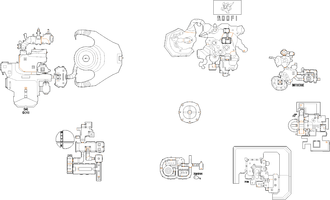 Map of L'agonie Finale
Letters in italics refer to marked spots on the map. Sector, thing, and linedef numbers in boldface are secrets which count toward the end-of-level tally.

* The vertex count without the effect of node building is 7281.