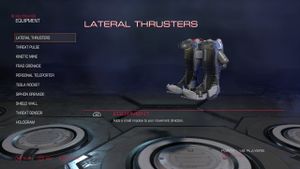 The lateral thrusters ready to be equipped.

Lateral thrusters are an equipment item in the 2016 Doom which is available only in multiplayer. It is a passive item that will propel the user into the air at a sharp angle, and can be activated while on the ground or in mid-air. The lateral thrusters were initially added to the game in the Bloodfall DLC pack, and were made available to all players as of update 6.66.

"Adds a small impulse to your movement direction."
― Menu description

In multiplayer, the lateral thrusters can be used in many ways, chiefly for reaching areas that can't be cleared with a double jump or to correct a mistimed jump and grab a ledge. Players using the thrusters can also confuse their opponents with a sudden flight and follow up with a killing blow from above or escaping the fight entirely to restock and replenish health.

The lateral thrusters use the same model as the Delta V jump-boots when viewed in the equipment selection menu. They also resemble the Long-Jump Module from Half-Life.