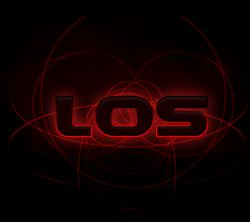 Legacy of Suffering's logo made by Licinio Souza.

Legacy of Suffering (a.k.a LOS), is a Doom 3 themed mod for GZDoom and Skulltag created by Logan MTM, released on 28 November 2009, and was updated on December 1 the same year. It received one of the 2009 Cacowards. The mod also contains artworks by Licinio Ribeiro de Souza and was playtested by Nigel "Enjay" Rowand.

The player assumes the role of John Logan, one of four supersoldiers trained by the UAC military division stationed on the Moon, having the power of regeneration and super strength. It is revealed on the introduction scene that the Moon Station was created on the year of 2045, which the main proposal was the production of Hydrocon and weapon experiments. When the game starts, one century later, the station is quite abandoned, working as weapon warehouse. It is also revealed that Logan was one of many trainers of Space Marines, but he was arrested before the events of the game, being stuck on the infirmary due to allegations of hallucinations.

At the year 2145, right after the events of Doom 3, the Moon Station is invaded by hellspawn forces, quickly taking over the base, and all of its soldiers being possessed. Far away from the center of the invasion, John Logan manages to escape from the infirmary and search for survivors, using his unique Cannon Shotgun and other weapons to defend himself from enemies. Not long after, he encounters a man using a chaingun coupled with a rocket launcher, killing monsters, who he believes to be another super soldier. But, right after a quick conversation with him, Logan is attacked, but manages to kill the man and take his chaingun.

Knowing that he is the only living being on the Moon, John Logan struggles to restore the power on the base and escape through the monorail. Passing by the sectors of the base, he has many interactions with a strange ghost of a woman, who appears to help him, sometimes by opening doors or by giving him keycards. He also learns from messages of former UAC employees some problems, jokes and the daily events of the base. One of these messages is from the moon's administrator to Ian Kelliher, saying that he is worried by Dr. Betruger's teleporters on Mars and its links to the Moon, hinting that the demonic invasion on the station is a consequence of the events of Doom 3. The message also hints that one of Elliot Swann's reasons to stop Betruger's experiments on Mars was because of the moon's administrator ordered him to Earth one month before November 15th, on an attempt to solve this case.

After reaching the Monorail Base, John Logan discovers that the monorail itself is actually gone and the only way to escape is using the teleport technology. While fighting with the monsters, John finds a Plasma Rifle with a BFG shot. After reaching the Teleport Experiments Sector, John battles with the Cyberdemon and struggle to fix the teleporter's power. On the way, he discovers an old laptop, containing a secret message, which reveals that the ghost who was helping him is actually a deceased Samantha Grimm, using a fake alias as "Sara Grimm". The message was written on 2048, stating that Samantha and her brother John Grimm were arrested by the UAC right after the events on Olduvai Research Facility shown in the Doom movie. John Grimm's fate is also revealed, as he was used as test subject by the UAC scientists on the genetic experiments with the C24. The message also explains the results of the use of C24 depends on the test's morality, so the subject may become either a demon-like mutant or a supersoldier, hinting that John Logan himself has C24, which gave him his regeneration power. The message also hints that John Grimm's regenerations power turn him ageless and the may actually be alive somewhere on Mars City, explaining that the reason why the ghost is helping John Logan is to find her brother on Mars.

After activating the teleporter, John Logan sees the resurrected rocket-chaingun soldier, but he is teleported before being shot. On the Communications Center, John discovers that the demonic force is being lead by the Shadow Knight, an enormous demon monster which is invisible and immune to all firepower except plasma energy. He also learns that the only way to escape the facility is to teleport to Earth. After getting the last keycard to the main teleporter room, John Logan confronts the Shadow Knight.

After killing him, he has a vision of a unknown creature congratulating him on defeating the monsters and saying that they will meet soon. John Logan shoots the invisible monster with his Cannon Shotgun, and a scene of the main teleporter room being closed is displayed, along with a message saying that the past teleport test subject's destination is unknown. Right after credits, it is revealed that John actually gone to Hell instead to Earth.

After killing many of the hellspawn forces through the Hell rooms, John is trapped on a room with two Arch-Vile stone statues. As the screens fades to black, the sound of two Arch-Viles being activated is heard. The mod ends with a quote from the metal band Nevermore's music lyrics "My Acid Words": "Death and suffering all around me, no escape so why go on?". John Logan's ultimate fate is not revealed.

The mod consists of a new episode for Doom II, with eight maps, each one serving as a Act for the story, plus a ninth map after the credits and a special Invasion map for Skulltag. The style of the maps evoke a Doom 3 atmosphere, with high-tech detailed rooms and corridors created through high-resolution textures and the use of 3D floors, brightmaps, dynamic lights and ACS. All maps can be played in single player, cooperative or deathmatch.

The arsenal has been modified and increased: the fists are faster and more powerful. the shotgun and double-barreled shotgun are quite faster than the original Doom shotguns; the chainsaw and chaingun are very similar with the Doom 3 versions, and chainsaw having alt-fire feature. The new weapons include the quadruple-barreled shotgun called the "cannon shotgun", which has a reload feature, along with the option to fire one shotgun at time or four shots at once. A combination of chaingun and rocket launcher is obtained after killing a sub-boss. The plasma rifle also is modified, by having both the usual shot and a BFG shot, which is a combination the Doom Movie's Bio Force Gun shot and the standard BFG. All new weapons also make use of the alt-fire feature.

All enemies corpses burn with the exception of zombie corpses, like in Doom 3. Zombies have been resprited and their eyes now glow in the dark, also like Doom 3. Some new zombies are introduced, as the ones armed with super shotguns and others with chainsaws. The arachnotrons now look halfway between the normal Doom 2 one and the Doom 64 one, and leaves a cell recharge behind when its corpse evaporates. Imps are darker and have more spines. Monsters such as the Hell knights and barons attacks from both hands, and the revenant now fires two missiles at once. Other monsters, like demon and cyberdemon, are not modified but now have brightmaps.

New NPC characters are introduced, and some from Doom RPG, Doom 3, Doom novels and the Doom movie are referenced or make a appearance, joining the universes. The mod also use a lot of Doom 3 sounds and effects, which hints that possibly the ghost on Doom 3's Alpha Labs Sector 5 and the ghost on the mod are the same character.

The mod's soundtrack consists on only metal music, including tracks made by Marc Pullen, some tracks from the Painkiller game, and the Ultimate Doom's E1M8 remix by Sonic Clang used as the final confrontation music. When the music is not been played, the game use ambient sounds, many also taken from Doom 3.

The mod was officially announced in 2008 on the BrDOOM Forum called: "Legacy of Suffering - Episode One: Dark Base", a new version of Logan's old 2006 project with Maurício Rocks "Dark Base" 2007 project.The announce included a few screenshots and a game play video.

Both projects had the Doom 3 high-tech atmosphere, but the original 2006 LOS's story was supposed to happen after the events of Doom 3, had John Logan interacting with another survivor of Recon Zulu (possibly, the Doom 3 protagonist), and the gameplay was supposed to be a "cooperative single play" between these two characters on new areas of Mars City. On the other hand, Dark Base's story was supposed to happen on the canceled moon base from a NASA project, with an anonymous marine fighting demons on this base. When the two projects were joined, the storyline was moved to happen at the same time as Doom 3 events, with only John Logan as a survivor on the moon station.

At some point, the mod was supposed to have more artwork to detail the story, including 3D models, but they were discarded because the project was getting too late to be released.

The mod was internationally announced on May 14, 2009 at the ZDoom community forums, followed by identical threads on the Skulltag and DRD Team forums.

Months after the release of LOS, Logan MTM posted on the BrDOOM Forum the sequel of LOS, called "Symphony of Destruction", and the only details revealed was that the mod was supposed to be a high-quality mod, using only high-quality textures, sprites, animations that improve the Open GL mode. The story was not revealed, but was rumored to involve John Logan's fate as he end up on Mars City, joining John Kane (Doom 3's protagonist) and other Recon Zulu rescue team marines to fight the forces of Hell. At some point of the game, the marines were obliged to go to the old Olduvai Research Facility on the south of Mars, where they would encounter an alive John Grimm, who would join the other Johns to escape from Mars. The new enemies would include a demonic version of the "Sarge" who was played by The Rock on the Doom Movie; the return of the "chaingun-rocket guy" as a main antagonist (and with a name), and an appearance of a modified spider mastermind, which was the only Doom II monster which did not make an appearance on the mod.

In 2011, however, the project was canceled by from lack of interest. The project was then forgotten when BrDOOM itself was shut down on December 2011.