(Redirected from Level 18: The Courtyard) 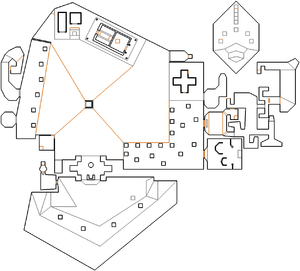 This map used to have unclosed sectors inside the building housing two invisibilities.

In the outside area near the shotgun, the outer walls are so low and close to the play area that you can see the sky wrap. The top of the sky is displayed below the buildings.

The sky problem area also contains a spot where the ground has a triangular sector, which means that the wall is extremely thin at one end.

The pit near the start area has different textures for the lower texture. Some of them have a green nukage border at the bottom, others do not.

The door at the beginning of the level is triggered by shooting/punching/chainsawing it, but the "trigger" for the door remains active even after it is opened. The door in question uses the "GR Door Open Stay" linedef type, and Doom II does not include a non-repeatable version of this trigger. Therefore, if you stay inside the room and shoot at the imps outside, every gunshot towards (and through) the door sets off the "switch flipped" sound effect.

The invulnerability inside the central pillar can be bumped from the eastern side.