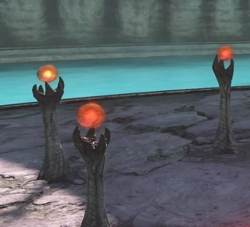 Life spheres in the Tomb of Souls.

Life spheres are orbs of light that are stated to contain the "memory, intelligence, will, and the essential nature of a being's consciousness." In The Ancient Gods, Part One, much of the plot centres around the retrieval of the Father and the Dark Lord's life spheres, which are housed in the Tomb of Souls in the Ingmore's Sanctum, which towers high above The Blood Swamps in Hell.

Early in Urdak's history, the Seraphs constructed the Luminarium as an act of contrition after the Father stripped them of their wings; within the Luminarium they built machines capable of fusing a being's life-force into a life sphere or reconstituting that sphere into a physical form. This process was used to resurrect the Khan Maykr each time she died, ever since the first Khan Maykr died in the siege of Kaza-Dur. According to the Book of the Seraphs, only the most indomitable beings can survive having their consciousness fused into a life sphere, and even fewer can survive the process of being restored to physical form.

The Father chose to extract the life spheres of gods that he considered "flawed" and kept them in the Tomb of Souls in the Ingmore's Sanctum, a last sacred part of Hell that is described as being a fragment of Urdak itself, and the last trace of the once-holy realm of Jekkad. This is also where the Father placed the Dark Lord's life sphere after his defeat, and ultimately, where the Father's own life sphere was kept when he left the physical realm and tasked Samur Maykr with hiding it.

During The Ancient Gods, Part One, Samur tasks the Doom Slayer with retrieving the Father's life sphere; his body is undergoing rapid Transfiguration and he believes only the Father can prevent it, but he requires the Slayer's assistance as Maykrs cannot enter Hell. When the Slayer reaches the Ingmore's Sanctum he finds Samur waiting for him at the Tomb of Souls; Samur again urges the Slayer to take the Father's life sphere, but he crushes it in his hands and takes the Dark Lord's sphere instead.

With the Dark Lord's life sphere, the Slayer is able to travel to the Holt and reach the Luminarium where - after defeating the now-Transfigured Samur in battle - he presents the sphere to the Seraphs so they can reconstitute the Dark Lord into physical form.