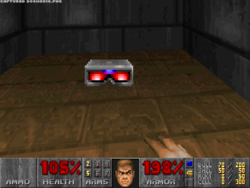 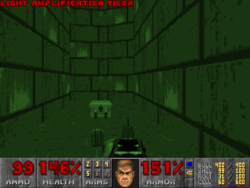 In the Atari Jaguar port and most other ports directly based on it, the visor is absent, along with the blur sphere. The item was restored for the Sony PlayStation version, and appears particularly in maps derived from Doom II. In Doom 64, instead of blinking, the added light effect simply fades into the current lighting when the power-up runs out.