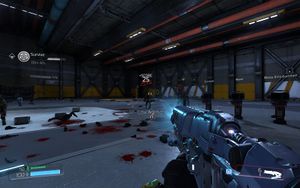 The lightning gun in use against some possessed in SnapMap.

The lightning gun is a new energy weapon which appears in the multiplayer and SnapMap modes of the 2016 Doom game. It fires a constant beam of directed electricity (presumably via electrolaser technology). It can attack either directly, or via splash damage-inducing electrical discharges targeted at the floor.[1]

Some Night Sentinel troops in The Ancient Gods, Part Two carry similar weapons, although they are not shown firing them.

In The Art of DOOM, the concept for the lightning gun is called the ARC cannon. It is stated to have been conceived by the UAC as a counterpart to the plasma rifle designed at the Advanced Research Complex and based on research into Argent conductivity. It utilizes modulation of the plasma current to achieve a sustained linear stream of discharge which is destructive to biological forms. Its production was stated to be limited, perhaps meant as a nod to its eventual multiplayer-only status.[2]

Lightning guns are wielded by some of the Night Sentinels during the siege on Immora, including two of the Ascendant armor-wearing Sentinels who man the ballista turret the Doom Slayer uses to fire himself into the city, and some of the Sentinels wearing Marauder-style armor.