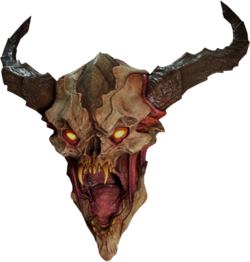 A lost soul.
This article is about the monster in Doom (2016). For other games, see:

The lost soul returns in the 2016 Doom in a form almost identical to its classic version, a flaming skull with demonic horns which rushes toward the player to attack. These lost souls however replace the bite used by their counterparts with a kamikaze-style attack wherein they will explode upon contact with their target, dealing significant damage.

The chainsaw cannot be used to kill lost souls.

Due to their small hitbox, any precise weapon will work well by sniping them from a distance (e.g. HAR with precision scope). A shotgun blast will send them hurtling backwards before exploding. This can deal some damage to any demons lurking behind or around it.

Lost souls are described in the Corrax Tablets as being the weakest form of demon, lower in status than even the imps. It is said that they are doomed to forever wander the Halls of Hell as nomads unless they can find a victim weaker than themselves to possess, a trait that causes the other denizens of Hell to despise them.

Lost souls home in on a potential host before exploding in a burst of Hell energy. If the host is sufficiently weak-willed, the demon will possess the host and the host's soul will then become a lost soul itself.