Lullaby is a PK3 for Doom II using the GZDoom source port that was released on February 15, 2021. It was designed by Daniel Alexander (Danlex) and uses the music track "Gluestar" by Darkwave0000. The main map is surrounded by a title map (featuring "Dream a Dream" from Alundra) and an epilogue/credits level (with "Day of Mourning" by Stewboy). It received a Cacoward in 2021. 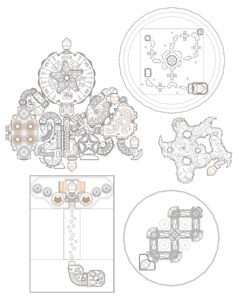 Map of Lullaby
Letters in italics refer to marked spots on the map. Sector, thing, and linedef numbers in boldface are secrets which count toward the end-of-level tally.

The (absence of) data was last verified in its entirety on December 10, 2021.