MAP01: Abduction is the first map of Harmony. It was designed by Thomas van der Velden (t.v.) and uses the music track "Mercury Stripes, Blue Mess" by Kyū. The par time defined in MAPINFO is 1:50. 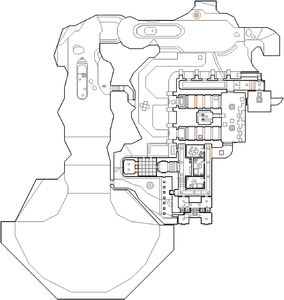 Map of Abduction
Letters in italics refer to marked spots on the map. Sector, thing, and linedef numbers in boldface are secrets which count toward the end-of-level tally.

Exit from the starting room and go left to get a computer area map hidden behind a table in another room. Grab the grenade as well and take care of the first Beastling that will appear from the air conduct. Dispose of the other few Beastlings and take the key. Go outside and take cover as some Followers will try to kill you. Get rid of them and take their shotguns then you can either go back inside the building by pressing a switch that will lower an elevator. Once inside, some Beastlings will attack you, shoot the explosive crates/barrels to kill them quickly and head left, where a prisoner, possibly Amira, will be seen, guarded by a Follower on top of an elevator. However when you approach laser bars will block your way and the elevator will lower. More guards will appear, including a Predator. Once outside head for the river, where there's a submarine which will submerge once you pick up the backpack. Follow the river's path until you find a ship guarded by Followers and Predators. Kill them, and open the boat door to finish the level.

* The vertex count without the effect of node building is 2396.