MAP01: Arctic is the first map of End Game. It was designed by Jan Van der Veken with additional areas added by Anthony Soto. 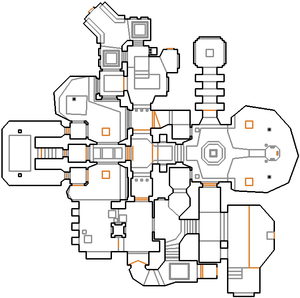 Map of Arctic
Letters in italics refer to marked spots on the map. Sector numbers in boldface are secrets which count toward the end-of-level tally.

* The vertex count without the effect of node building is 959.

The level is based on an early draft of E1M2: Mars Space Port (The Classic Episode, Part 2) started by Jan Van der Veken in 2003. Anthony and Jan then worked in parallel on their own versions. Jan's classic11.wad released in July 2003 has a completely different southern half to the map. It also doesn't contain the plasma gun present in Anthony's End Game version.